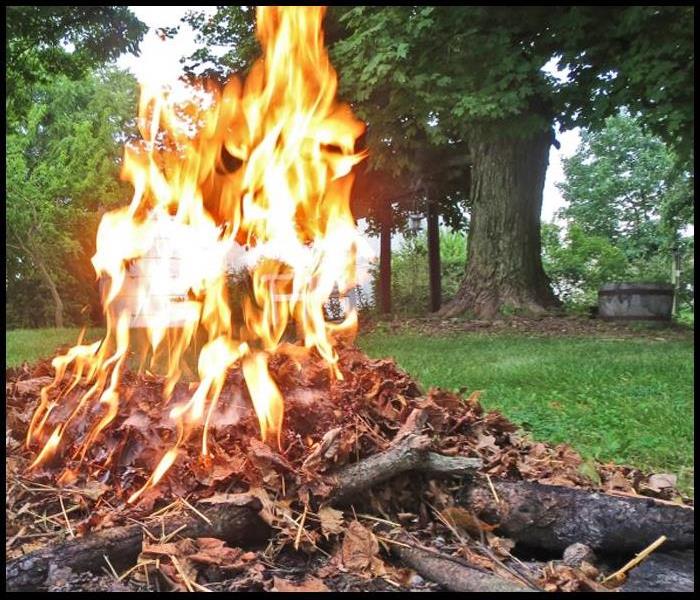 SERVPRO of Bear/New Castle, DE is locally owned and operated

With autumn leaves beginning to fall, SERVPRO of Bear/New Castle, DE reminds residents that burning leaves is prohibited in the state of Delaware.

Three DNREC yard waste drop-off sites are available for New Castle County residents as a cost free option to dispose of leaves and other yard waste.

Information on these options is posted on DNREC’s website

The State-Wide open burning ban runs from May 1st to September 1st of each year. That means that there can be no open fires burned anywhere in the state of Delaware during that five-month time period.

That five-month burning ban was not chosen at random. The time from May to September is known as the "Ozone Season" throughout the state of Delaware. The Delaware Division of Waste and Hazardous Substances defines "Ozone Season" as that time of the year when the increased temperatures and exposure to sunlight can mix with low-lying pollution to create a dangerous form of ground-level ozone.

This mixture of pollutants, dangerous chemicals and haze from the atmosphere create a dangerous smog that causes health issues for everyone, but especially for the very young and the very old. By eliminating open burning, there is less smoke and other airborne particles to create the dangerous ozone.

What is Open Burning?

The Division of Waste and Hazardous Substances defines open burning as any kind of outdoor burning process that produces smoke, with the exception of incinerators and outdoor heaters that employ a burning process.

August and September are usually the months when people start to clean up their yards and prepare for the fall. Some people may think that they can burn leaves when the open burning ban ends on September 1st, but the burning of leaves is banned in the state of Delaware all year round.

Residents who collect old branches and landscaping trimmings from bushes and trees can burn that debris with an open fire from October 1st until April 1st of each year. It should be noted that the outdoor burning of garbage and other non-landscape related refuse is explicitly banned in the state of Delaware all year round.

Each resident may have their own definition of "open burning," so the state of Delaware has developed a list of five burning methods that it considers to be open burning and banned during the "Ozone Season"

Homeowners who try to burn any kind of debris in their backyards during the banned months will be considered to be in violation of the open burning ban. This includes the burning of wood, grass clippings and paper.

While it may be popular to have a group of friends over to enjoy an open fire pit during the summertime in the state of Delaware, it is also illegal. The open burning ban covers and kind of open fire pit, large barbeque fire pits and any pre-constructed fire pits that sit on patios, decks or porches.

Contractors are not allowed to burn demolition debris with open burning during the banned months. Contractors who need to burn the debris from their demolition or construction projects are encouraged to contact licensed incinerators to have the burning done legally.

The state of Delaware does not allow open burning that is used for land management purposes during the banned months. This includes controlled fires designed to manage forested areas and any residential properties that may utilize controlled burns to prevent property damage due to wild fires.

Some farmers will clear their fields using open burning. But this activity is not allowed during the banned months. This includes the process of removing crop residue or trying to revitalize a stretch of farm land.

SERVPRO of Bear/New Castle, DE takes great pride in being an active member of this community. We want to do our part to ensure the community thrives by keeping the area safe and making it the best it can be.

SERVPRO of Bear/New Castle, DEis a trusted leader in the restoration industry. We provide 24-hour emergency service and are dedicated to responding faster to any size disaster. With the training and expertise to handle your restoration and cleaning needs, we’re locally owned and operated and can respond immediately to your emergency.