Dangerous Mistakes to Avoid When Using a Space Heater 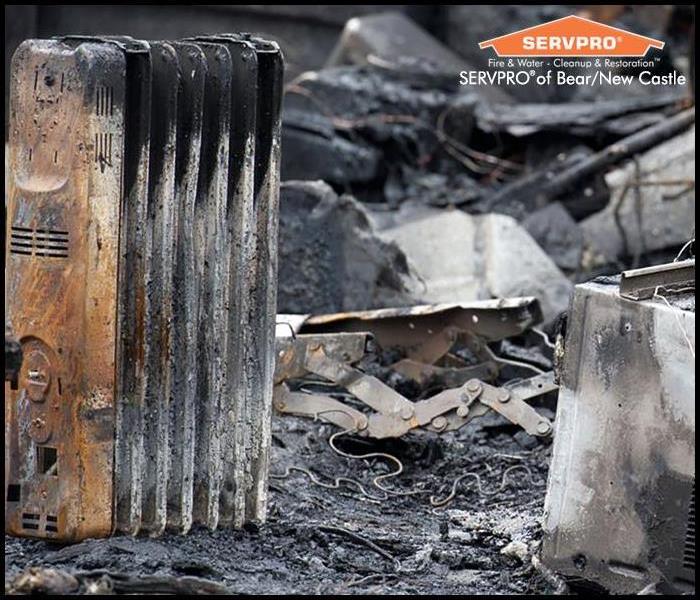 SERVPRO of Bear / New Castle is dedicated to responding immediately to your Bear fire damage emergency.

According to the National Fire Protection Association, space heaters cause 43 percent of home heating fires each year, which are the second leading cause of fire-related deaths. In addition to the risk of fire, space heaters that use kerosene, propane, and natural gas pose an additional risk of releasing carbon dioxide (CO2), carbon monoxide (CO), and nitrogen dioxide into the air if they aren't properly vented, which can lead to serious health problems and even death.

According to Consumer Reports, electric space heaters might be a safer choice for indoor use, as they don't emit carbon monoxide or other pollutants, but they can still pose a risk of fire if you operate them near flammable materials (like curtains, bedding, or furniture), overload an electrical circuit, or leave them unattended.

Leaving Them On Unattended

As Iowa State University notes, gas and kerosene space heaters are inexpensive and portable, which make them popular this time of year. But because they aren't vented to the outside, like your gas or propane furnace or fireplace, they can release harmful gases into the air like carbon dioxide, carbon monoxide, and nitrogen dioxide, which can cause symptoms like headaches, coughing, sleepiness, and even death. If you do use one of these heaters you should ventilate your home, as directed by the owner's manual, and using a carbon monoxide detector.

Letting Your Kids Nearby

This might seem like common sense, but Consumer Reports warns parents to keep their kids away from space heaters. This means you shouldn't let them touch them at all, play with the buttons, or move them, even if you are around to supervise. Instead, it's best to not use one if you can't keep your kids a safe distance away.

Placing Them Up High

According to Consumer Reports, you should never place a space heater on top of a dresser, table, or other piece of furniture. While it may seem like an ideal way to keep them out of your kids' reach, they could fall or be pulled off and start a fire, become unplugged, or result in burns or other injuries. The NFPA adds that you should use gates to create a "safe zone" of at least three feet around your space heater, to keep kids and pets a safe distance away.

According to Consumer Reports, space heaters can pose a risk of electrical fires, too. If you use one you should be careful to not overload your circuits by plugging directly into the wall, using a three-prong extension cord or a using a power strip with a surge protector.

Placing Them Near Flammable Items

According to the NFPA, operating a portable space heater near items that caught fire (like furniture, curtains, or bedding), or where flammable items like clothing or towels could fall on them, resulted in 53 percent of home-heating related fire deaths between 2010 and 2015. Consumer Reports adds that as tempting as it might be, you should never use a space heater to dry or warm up clothing or shoes, as that can also pose a fire risk.

According to the NFPA, the best way to keep your family safe from home-heating dangers during the winter months is to install smoke and carbon monoxide detectors. They recommend installing interconnected smoke alarms — which will all go off at the same time — inside and outside each bedroom on every level of your home, and to test them monthly. They also advise avoiding gas and propane heaters that don't vent to the outside, and installing carbon monoxide detectors to alert you to this danger that you can't see or smell.